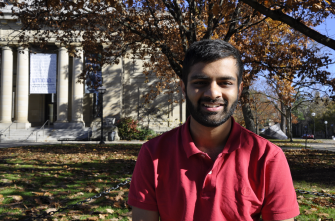 An essential element of the college experience is exploration.

Exploring career options. Exploring academic and social interests. And, for many, exploring one’s own identity.

For students who identify as LGBTQ – often doing so for the first time publicly while in college – this exploration can be riddled with feelings of alienation, fear, and uncertainty.

Tarak Bhargava is working to change that.

The first-year graduate student from Bangalore, India connected with the university’s Spectrum Center not long after arriving on campus in the fall to start his Master of Science in industrial engineering.

For many in the LGBTQ community, it was a difficult time, Bhargava said.

The June mass shooting at a gay nightclub in Orlando was still fresh in people’s minds. The especially divisive presidential election was in full swing. A new initiative allowing U-M students to indicate a preferred pronoun on class rosters brought ridicule from pundits across the country.

“I wanted to do something to help others feel comfortable coming out,” Bhargava said. “A lot of people’s families still don’t accept it.”

In Bhargava’s native country, identifying as LBGTQ can be difficult, especially in rural or less affluent areas, he said. Families are not accepting, so many young people stay in the closet until they are more financially stable. Even then, they may keep their identity secret from family members.

“When I was growing up, there wasn’t anything like the Spectrum Center,” said Bhargava, who completed his undergraduate degree at the Rashtreeya Vidyalaya College of Engineering in Bangalore.

The Spectrum Center is an organization within Student Life that provides support services to the university’s LGBTQ students and works toward a more inclusive campus community.

It was founded in 1971 after students and community members created a local chapter of the Gay Liberation Front to combat gay stereotypes, fight homophobic prejudice, and challenge the belief that homosexuality was a symptom of mental illness.

Bhargava serves on the group’s 8-person programming board in hopes of spreading greater awareness of LGBTQ issues and ensuring students have a “comfortable environment” where they won’t be judged.

“There will always be people who care about you in your life who will accept you for who you are,” he said. “People should know that.”

Those interested in learning more about the Spectrum Center’s support services and programming should contact the organization at 734-763-4186 or spectrumcenter@umich.edu.