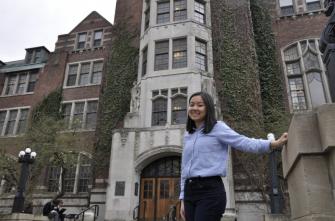 Her grandparents spoke the language, and she had always been fascinated by Russian literature and history.

So when Peixin Yang learned that the Residential College program at the University of Michigan offered the chance to engage in intensive study of the Russian language while being part of a tight- knit community that emphasized humanities and arts, she was sold.

The Chinese international student said the opportunity simply wasn’t available in universities near her hometown of Shenzhen, a metropolis of more than 10 million people that borders Hong Kong in southern China.

“I just felt like the college system back home was not exactly what I was looking for,” said Yang, a junior who double majors in economics and Russian and Eastern European studies.

But traveling halfway across the planet to attend an unfamiliar university comes with its challenges, especially for someone who is the first in her family to go abroad for college. The cultural differences that separated Yang from her American peers would sometimes create unease.

So she decided to try a different approach, joining the International Center Student Council at the beginning of her second year at U-M. ICSC’s mission is to provide globally minded students with a forum to identify and examine issues affecting students.

It was here that she realized that other international students from across the globe were experiencing a lot of the same struggles. The group held discussions on cultural barriers, mental health issues, career planning, and living off-campus.

“It helps to bridge the gap,” she said.

Choosing to move to the United States and attend U-M was one of the most important – and fulfilling – decisions of her life, Yang said. She spent the summer after her freshman year working for the tourism ministry in Albania through the International Internship Program in the College of Literature, Science, and the Arts. This year, she’ll spend her summer break studying abroad in Russia.

“The people here at the university are what inspire me,” Yang said. “There’s a niche for everyone, as long as you try to reach out and step out of your comfort zone.”