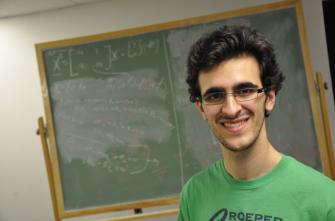 By the time Michael Jenuwine began his freshman year at the University of Michigan, he had already decided what to study. He was interested in the social sciences and, in particular, economics.

Some professors suggested that establishing some baseline knowledge in math would be helpful in this field, so he enrolled in Math 217: Linear Algebra.

It was the first class that required him to complete math proofs, and it presented quite a challenge, said Jenuwine, now a junior.

“I was doing twice the amount of homework compared to my other classes,” he said. “But I was really enjoying it.”

So Jenuwine did what scores of other students at U-M do each year when presented with new and interesting experiences. He changed course.

In retrospect, there were always hints that Jenuwine would develop a deeper interest in math. While in high school, he spent two weeks on campus with Michigan Math and Science Scholars, a summer enrichment program designed to encourage the next generation of researchers to develop and retain a love of mathematics and science.

He worked in a small classroom setting exploring a mathematical theorem called the Brouwer Fixed-Point Theorem. The instructor was Stephen DeBacker, the same professor who would later encourage him to take a few math courses to supplement his economics major.

And Jenuwine is no stranger to academic challenges. The College Board’s highest award level for high school students is National AP Scholar, a designation granted to those who receive an average score of 4 out of 5 on all AP exams taken, and scores of 4 or higher on eight or more exams.

Jenuwine earned a perfect score of 5 on all 13 AP exams he took as a high school student in Troy, Mich.

This year, Jenuwine made the change official, declaring his major in mathematics. He even tutors now in the U-M Math Lab.

“I’ve been exposed to a lot of things based on the classes I’ve had and the interactions I’ve had with professors,” he said. “The path has definitely changed a bit from where I thought I would be.”