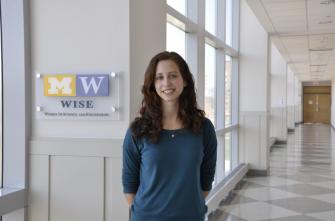 In the world of computer science and engineering, Jule Schatz is a bit of a rarity.

She loves coding and Arduino boards and programming robots to complete particular tasks. But she also loves charcoal drawing, painting, and experimenting with colors and composition. Logic and creativity. Analysis and imagination. Left brain and right brain.

“Engineering is very black and white,” said Schatz, a senior from Okemos, Mich. “Art is all the grays in the middle. Doing both keeps me sane.”

But there’s another, and perhaps more obvious, trait that sets Schatz apart. She is a woman in a field historically comprised of mostly men. In fact, only one in four students in the College of Engineering is a woman.

Schatz is hoping to change that as part of University of Michigan Women in Science and Engineering (WISE). The program is designed to increase the number of girls and women pursuing degrees and careers in science, technology, engineering and mathematics while fostering their future success.

She first got involved with WISE after being hired to help staff a summer engineering and science program for middle school girls. Later in the summer, she worked with WISE again for a week-long computer programming camp on campus for high school girls.

When classes started again in the fall, Schatz continued working for WISE as the coach for the organization’s middle school FIRST LEGO League team. The all-girl squad designed, built, and programmed LEGO robots to compete against other teams in performing autonomous “missions” on a playing field.

They met every Sunday throughout the fall semester to prepare their robot and develop skills in team-building and critical thinking. They went to the regional competition – where it was difficult to find a single girl on most teams – and won.

“Girls often don't try out STEM because they don’t associate this field with their gender,” Schatz said. “But WISE is providing opportunities. It is changing the image of who these girls associate with STEM fields, and I'm proud to show them what a computer scientist can look like.”