Charles Shin (’18) pursues entrepreneurship to further goals, before and after graduation 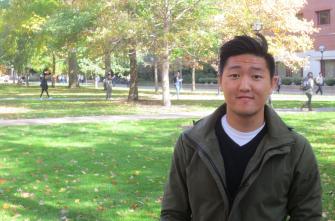 Charles Shin has always been somewhat of a tinkerer.

The School of Information junior from the northwest suburbs of Chicago said he has always had “side projects” in addition to his coursework, even in high school.

At the University of Michigan, those projects have ranged from a marketing design challenge for Pandora Media (which he won) to co-founding and designing a web platform called Finn that automates the financial aid application process for students similar to how TurboTax walks users through filing their income taxes.

“Most of my time is actually dedicated to outside projects,” said Shin, a first-generation college student. “After college, no one’s going to ask you for your GPA or ask you to take a test.”

It was this approach to the college experience that led Shin as a freshman to Innovate Blue, U-M’s campus-wide initiative on entrepreneurship and innovation launched in 2014. The initiative’s mission is to support, connect, and expand the Michigan entrepreneurial network and community, which includes 15 programs and centers and more than 30 student organizations.

Shin works closely with Innovate Blue through its minor in entrepreneurship, first offered in 2015. The 15-credit undergraduate program is open to students from all majors and includes teachings from a variety of disciplines and an approach that values immersive experiences.

The minor has exposed Shin to a number of courses that have helped him to consider how best to meld his academic focus on user experience (UX) design with the business world. For example, he recently took a psychology class that dealt with negotiation.

“You take classes that are not in the school or your major,” he said. “There’s a lot of flexibility – anything that seems interesting to you.”

Shin also received an Innovate Blue grant last summer that allowed him to complete an internship with the San Francisco-based web hosting company, Weebly. The grant money covered transportation and the city’s notoriously high living costs, as well as the fees to professional conferences.

After graduation, Shin hopes to return to California to focus more on the career he has already begun to build as an undergrad at U-M.

“Entrepreneurship is this belief that you can make something better than anyone else in the world,” he said. “That to me is so appealing. It’s so cool.”