Building Community on Campus: Dominic Petersen (School of Kinesiology) contributes to the same networks that helped him when he first arrived at U-M 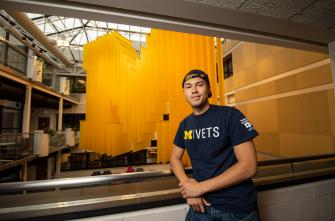 When considering options for completing his degree, Dominic Petersen knew that — thanks to its wealth of resources and veteran-specific programs — one route stood out among the rest.

“Coming to the University of Michigan was an easy choice,” Dominic said. “It’s a place of opportunity.”

These resources, such as academic advising and networking, immediately helped Dominic make a smooth transition from life in the military to life attending classes at U-M.

“I first got involved in Veteran Services when going to a Military Welcome Meeting and immediately felt comfortable,” Dominic said. “Military and veteran groups on campus provided a social and academic infrastructure that helped in the success of my college career.”

When Dominic arrived on campus, he joined nearly 1,000 other military-connected students, comprising a valued and vital component of the campus community. Before coming to the University of Michigan, Dominic spent six years in the U.S. Army as a logistician. During this time, he also attended classes at Kalamazoo Valley Community College and Western Michigan University.

In addition to attending classes here in Ann Arbor, Dominic has worked to build on his appreciation for the support of the U-M military-connected community. Last year, he started working with the Peer Advisors for Veteran Education at Michigan (PAVE) program, helping fellow veterans with the transition to college life. This support was critical for Dominic, and he is more than happy to share his experiences with other incoming veterans.

“If I were to give any advice, I’d say to take advantage of all the opportunities to interact with your fellow service men and women,” Dominic said. “I’ve made great friends that have only helped me in becoming better.”

Dominic will graduate this winter as part of the Sport Management program within the U-M School of Kinesiology.

Learn more about Veterans on campus at the U-M Veterans and Military Service website.